Do Homes Sell Better (or Worse?) In The Winter? 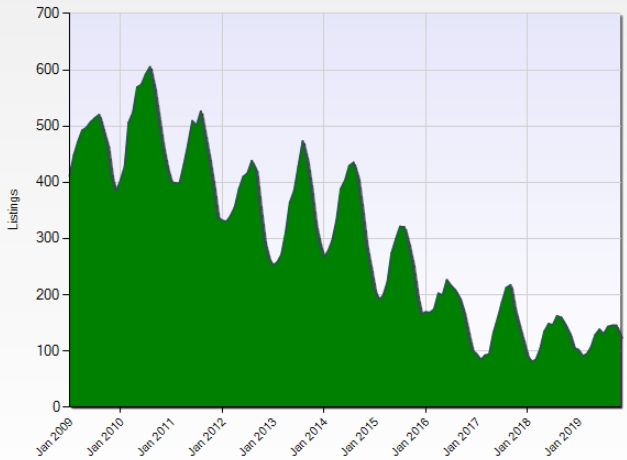 “We’re ready to sell, but since it’s November we’re going to wait until the spring. That makes sense, right?”

This question becomes the most “frequently asked” as we approach and are into the winter months. It used to be that virtually ALL sellers assumed it was a no-brainer: You did NOT list your home in the winter months, because buyers were dormant, the yard looks bare and cold, and the spring is THE best time because everything’s in bloom — including buyer activity.

Rather than trust ancient wisdom, though, let’s look at what the data says. We’ll approach it a few different ways:

We’ll look at the graph of seasonal fluctuation of Active listings.

We’ll look at seasonal pending percentage, as in how much of Active inventory is under contract.

We’ll look at average time on market for winter months versus summer months.

We’ll look at whether the average price (as a percentage of list price) goes up or down in the winter versus summer.

Look at this graph of Active inventory over the past 10 years throughout all of Bellingham:

Of course the clearest trend this graph shows is the overall decline in inventory over the past decade. Just compare our 2019 summer peak of 145 Active listings, to the winter low just 3 years ago of 169 Actives. If that trend continues — which some predict it will — it will be all-out war between buyers over the good listings.

So, Yes, the answer to our first data point is unequivocal: Active listings drop significantly in the winter months.

Over the past 5 years, the average decline from summer high to winter low is 49%. In 2017, the inventory plummeted 63%, from a high of 217 Active summer listings to just 81 Active in the winter.

This pattern remained constant from the beginning of data collection — probably from the first transactions in the history of humanity. Everything slows in the cold winter months.

OK, so there aren’t as many homes for sale in the winter, clearly. But of those that ARE Active, how many of them are selling?

Let’s look at a 5-year graph where the blue area shows Active inventory, and the orange area shows Pending inventory. 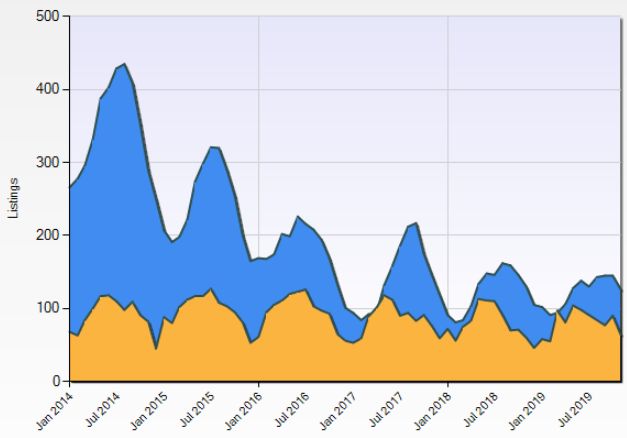 Before we talk seasonality, let’s acknowledge the AMAZING consistency on that Pending inventory, year over year. It barely changes, regardless of how many Active listings there were.

This points to an important truth we mention often: Real estate doesn’t just sell when it’s a “hot market”, it sells when peoples’ lives change. (We’ll go more into that in a later post.)

Look at the graph again, notice the same seasonal dips in overall number of Pendings. With that we can easily establish that Pendings decline in the winter — but that’s just the NUMBER of pending. With as little as 63% fewer listings in the winter months, buyers are left with very little to look at, so the drop-off in Pendings in predictable.

Going back to 2015, here are the summer high and winter low pending percentages: 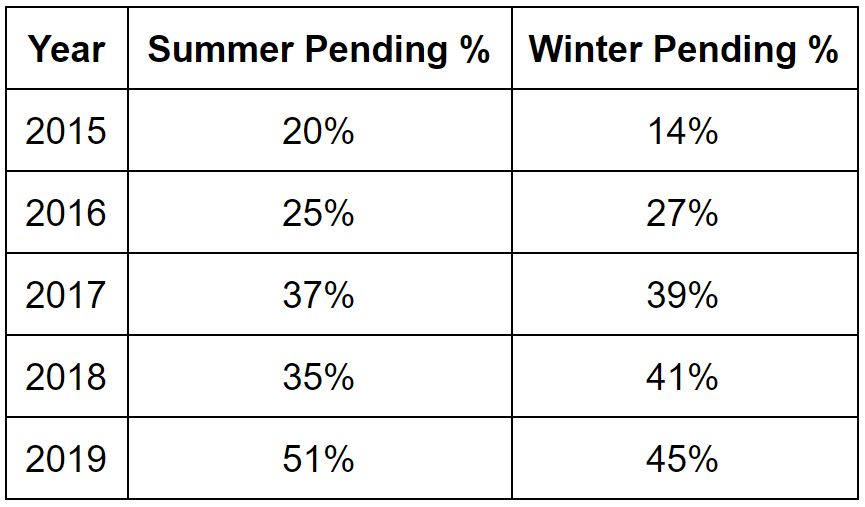 But on average, the summers have seen a 33.6% pending percentage against winter’s 33.2% — almost an even match!

Is this enough data to compel you to list in mid-winter? Let’s look at a couple more data points before you make your decision.

What is the Seasonal Fluctuation of Average Days on Market?

Year over year, the average time on market for homes sold throughout that entire year is shown in the chart below: 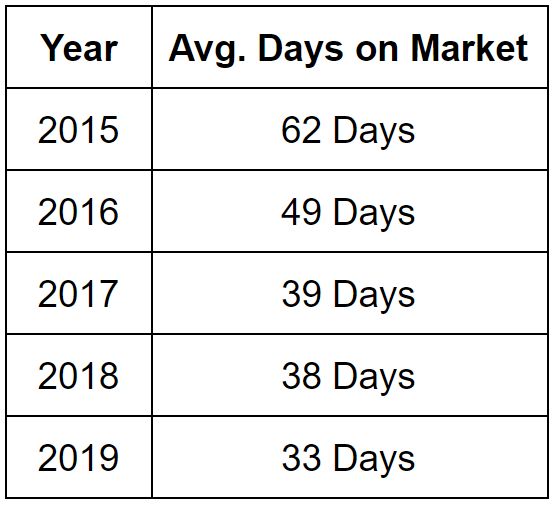 Time on market has dropped almost in half over the past 5 years.

But if we separate out the seasons, will we see a clear pattern showing faster or slower sales in summer or winter?

Let’s use the months of June/July for summer, and January/February for Winter. Here’s the chart: 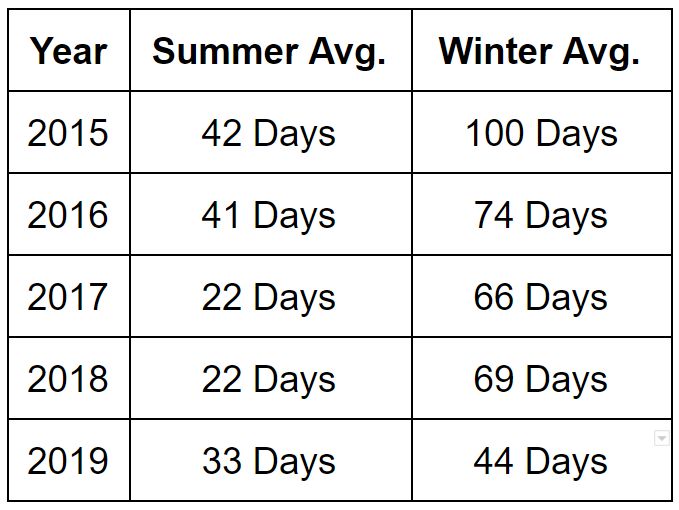 A clear pattern emerges. Summer average time on market over the past 5 years has been 32 days.

The winter average has been 71 Days —  more than double the summer average.

(In some years it has tripled).

So add one more data point for stronger summer sales.

Let’s wrap up with one final data point…

Seasonal Fluctuation of Sale Price as a Percentage of List Price

Put differently, do buyers get a bigger discount off the list price during winter months, compared to summer months? We can analyze this by looking at final sale price as a percentage of list price for homes that closed in January/February, versus closing in June/July. Here’s the chart:

Every year, going back 5 years, there is a notable drop in sale price percentage during the winter months. The gap has gotten much smaller during the last two years, but it’s there.

Taken as a whole, do these data points point to a clear, unequivocal statement to “Sell only in the summer?” That’s too strong a statement.

If you have the luxury of choosing the absolute best time of year, then the data would point to a spring or summer listing per this study.

But if life changes and it’s more practical or necessary for you to list in the winter, the sales in Bellingham during that time of year are still very strong, and with much less competition from other sellers.

Do what works best for YOU! 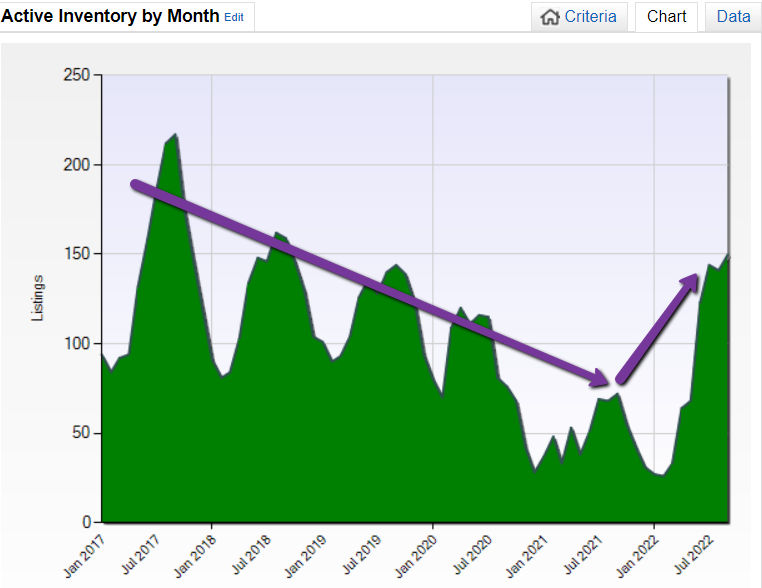 Changes We See in the 2022 Bellingham Real Estate Market