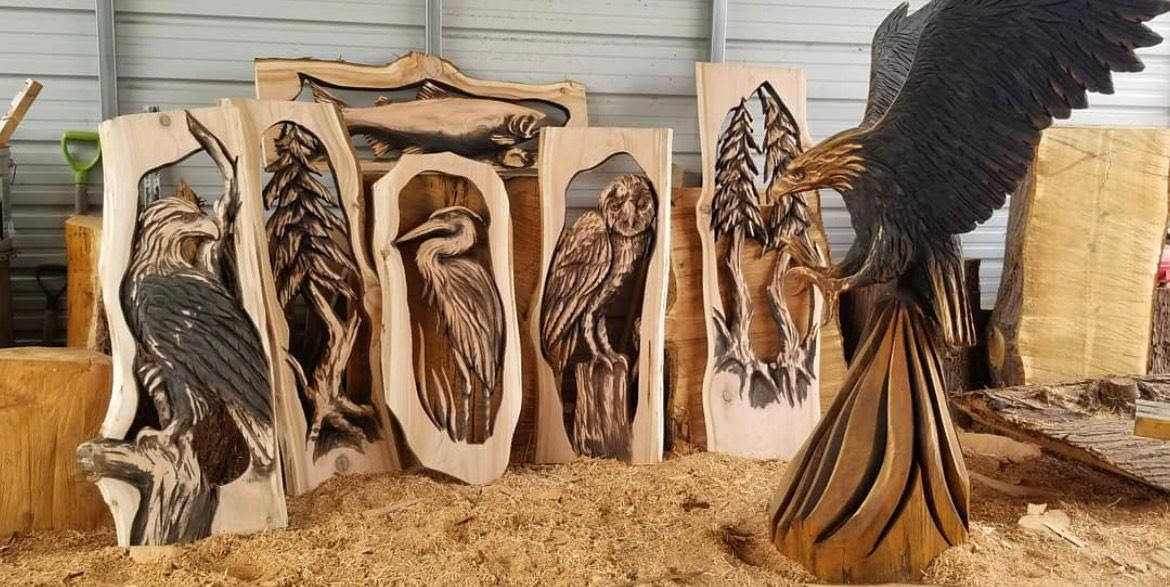 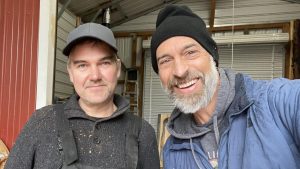 The partners at BNP are a thoughtful and generous bunch.

Having been subject to countless raves about my love of chainsaw carving, they joined forces to gift me a day spent one-on-one with locally-based and world-renowned chainsaw artist Tomas Vrba.

I had been a follower of Tomas’s through his Facebook and Instagram accounts but hadn’t realized that he lived and created his art locally!

Tomas was born in Slovakia, formally trained in classical woodcarving, and has earned a Master’s Degree in Sculpture Restoration from VSVU Bratislava.

He has worked, studied and trained in Vienna, the Vatican, and multiple other areas throughout the world.

Having married his wife Allison, who is from Seattle, in 2006, they moved to the Pacific NW and opened Tomas Vrba Studio.

How we spent six hours

On Wednesday, January 12th I arrived at Tomas’s studio at 9 a.m.

The “studio” is a collection of well-built outbuildings, massive log-piles, various machinery, and endless sculptures in various stages of completion, all situated on 5 acres with a gorgeous house up front. 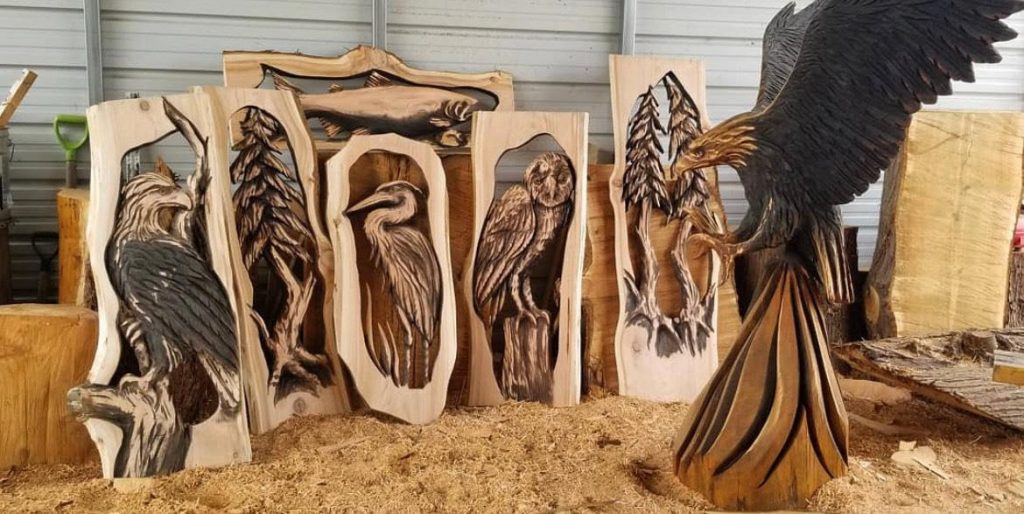 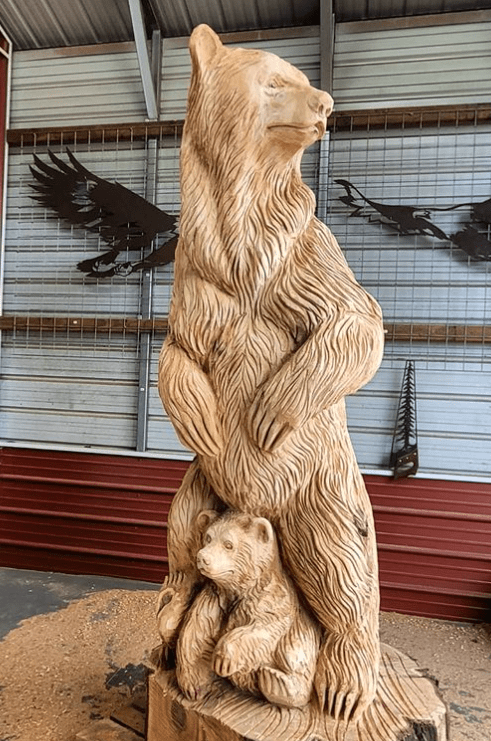 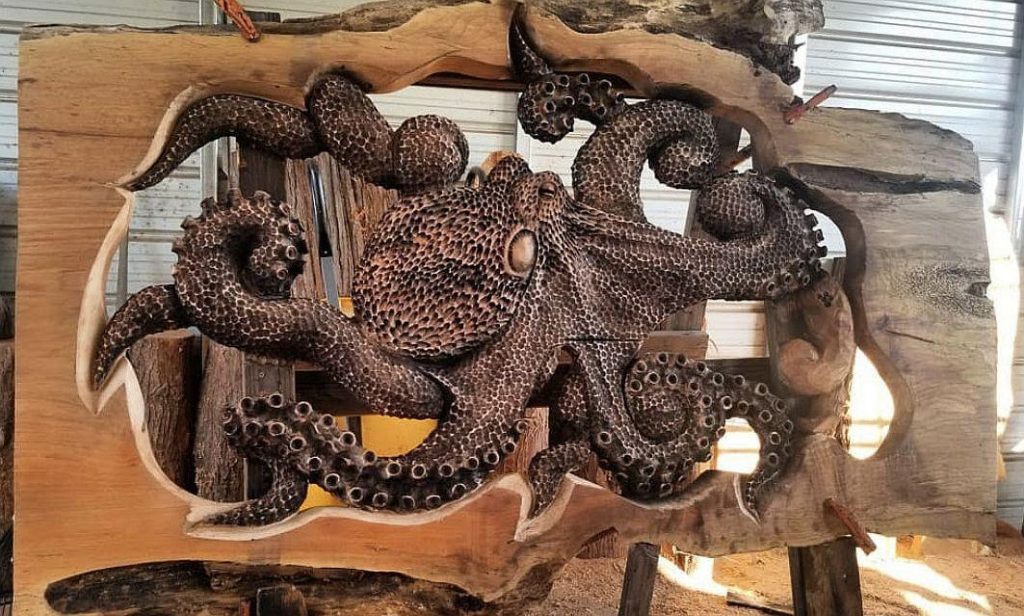 I half-expected Tomas to hand me a saw, tell me to pick a log, and start carving!

After all, that was the advice I’d been given from multiple other chainsaw artists when I asked how to step up my game.

But that was not at all Tomas’s approach.

He began by explaining and demonstrating the importance and power of drawing.

“One year of drawing is equivalent to ten years of carving,” Tomas explained.

He shared the drawing how-to books he keeps close at hand, and the app he uses on his iPad to quickly iterate and re-iterate the lines of a carving before he ever picks up a saw. 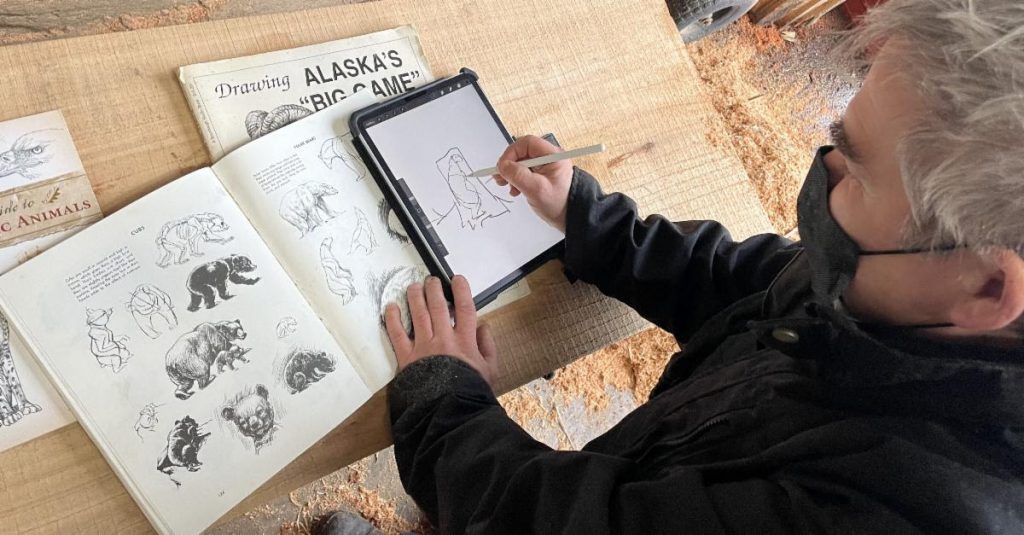 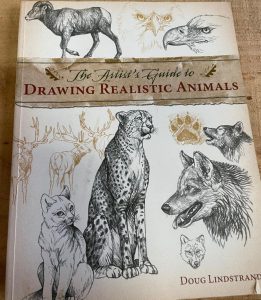 Tomas shared and repeated often this bit of wisdom about the tools chosen and utilized for any given piece:

“Make the carving fit your tools, rather than the tools fit your carving.”

He shared much of the array of tools he uses including: 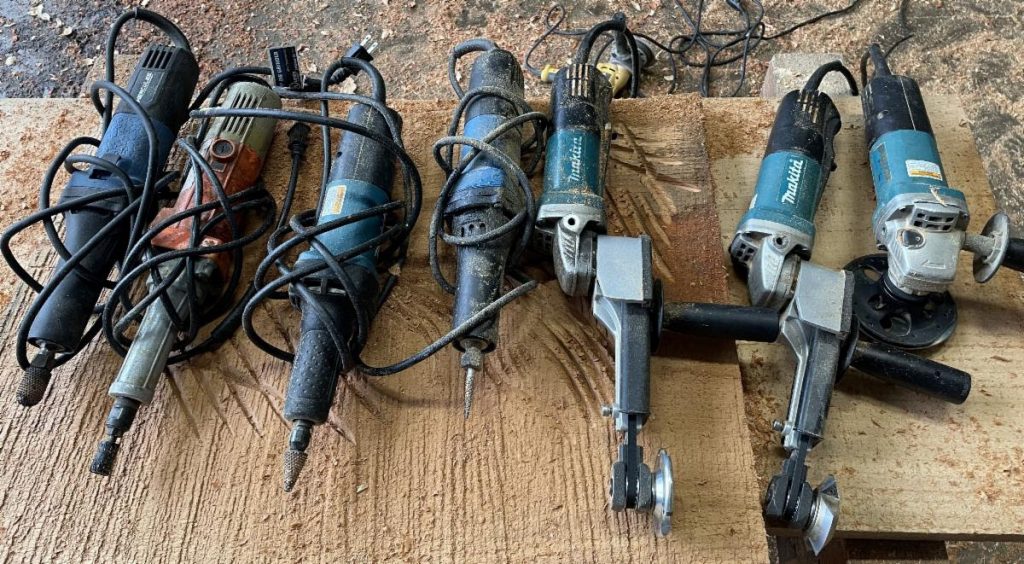 And those were just some of his wood-carving tools.

He also does metal sculpture with a completely different set of tools. We talked about the importance of studying the masters, like Michelangelo and Rodin.

A great introduction to those genius sculptors, Tomas explained, was to read the books The Agony and the Ecstasy, a biographical novel about Michelangelo, and Naked Came I, about Rodin.

In researching the books a bit more, I found this, below, interesting and amusing:

About The Agony and the Ecstasy, which is 776 pages long, Tomas said, “I read this book in three days, then I immediately read it again. You won’t be able to put it down. Your kids will love it, too!”

Compare that to this comment taken from the top-ranked of nearly 1000 reviews on Amazon: “The book is by no means an easy read; It took me weeks to finish. In fact, when I first bought it, I had to set it aside before I made it halfway, and I had to re-read it from the start.”

I haven’t started it yet, but I suspect it will be as much of an insight into Tomas’s genius as it is to Michelangelo’s. 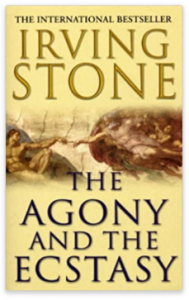 Intermixed with the overview of his studying, his workflow, the tool and technique demonstrations, Tomas explained how he built and now runs his business.

He shared the level of research he does on clients who commission custom pieces from him.

He told stories of the carving competitions he has entered and won first place here in the US, in Germany, in Japan, and elsewhere… and how in many of them he didn’t win, but he always learned.

And then, after 4 hours together, we began to carve a piece.

Tomas had said earlier that we would carve a panel rather than a 3D sculpture, because I would learn more and be able to apply that learning to any other type of piece I made.

We worked on a slab of cedar, where he had drawn two overlapping salmon.

The “rough-out” was made with a simple jigsaw.

The actual carving began with a small chainsaw fitted with a short, “dime-tipped” carving bar.

Tomas would demonstrate every single technique, how to angle, pitch, and roll the saw, whether to push with the top of the blade or pull with the bottom, what speed to run it at, how to balance it in my hands, when and why to move around the piece.

That first hour was all chainsaw carving.

At the start of of the second hour we switched to a grinder with an aggressive sanding disc, then to one with a conical burr.

We set the panel upright and with spray-paint Tomas showed and explained how darkening and shadowing affected the piece, followed by a strap sander, then a blowtorch, then a sander again.

He showed how the various planes of the different fish had to connect, or the eye would just “know” it was wrong.

With a cutting wheel on a grinder we grooved the fins and tails, and with an eye tool we added the eyes.

…and after two hours, we stood back, and called it done. With the fish carving complete, Tomas and I concluded the day of learning.

I loaded the finished piece into my car and drove home excited, my heart full, my mind eager to start using everything he had just unlocked for me.

My own carving will remain a hobby, something I tinker with when I have time, but it will be something I practice for the rest of my life.

And now, thanks to Tomas, and thanks to the BNP crew for gifting this experience to me, I will enjoy it with a broadened perspective, deeper understanding, and more joy.

What a blessing to have masters among us, especially those who so openly share.

The carving happened to be a hobby I already enjoy, having started about 3 years ago, though I would have enjoyed the day with Tomas as an introduction to the craft as well.

I’ve had the privilege of learning directly from other masters in other areas of my life, like taking a paddling clinic from 12-time world champion surfski racer Oscar Chalupsky.

On a similar level, in this age of podcasting, we all have the opportunity to tune in for free and listen to the top people on every subject imaginable have conversations with each other, debate, interview, and share their wisdom and insights.

At BNP Realtors we mention frequently that we are practitioners within our industry. We aren’t experts, nor authorities necessarily, but passionate practitioners following a common path.

Every one of us is ALWAYS practicing something. The question is, “What are you practicing?”

What subject inspires your inner “student for life”?

If you’re inspired to share, I am all ears, my friend! 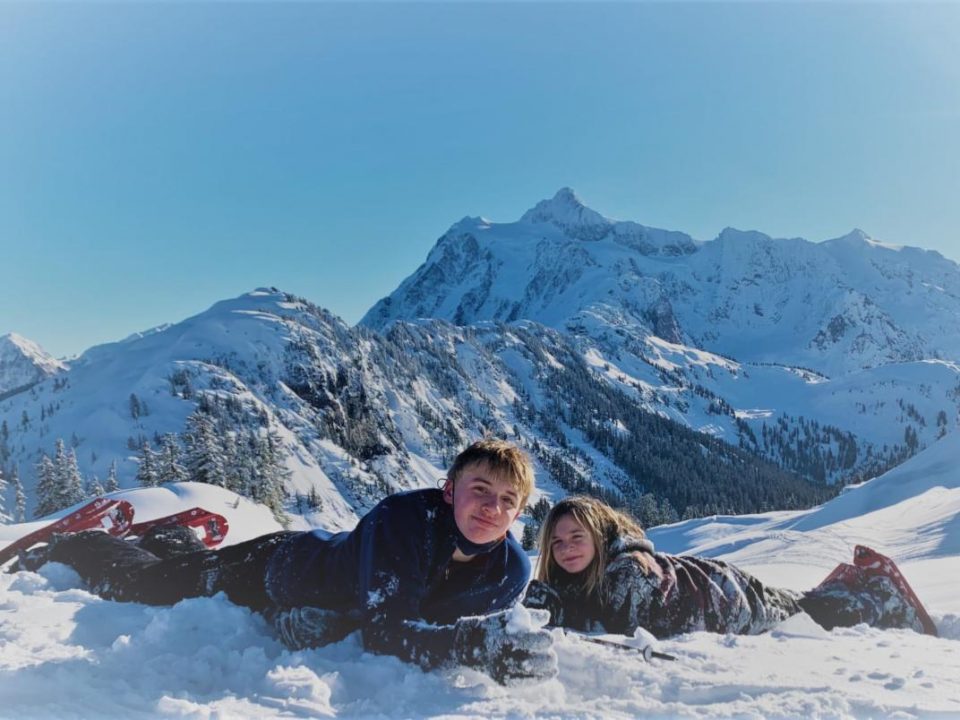 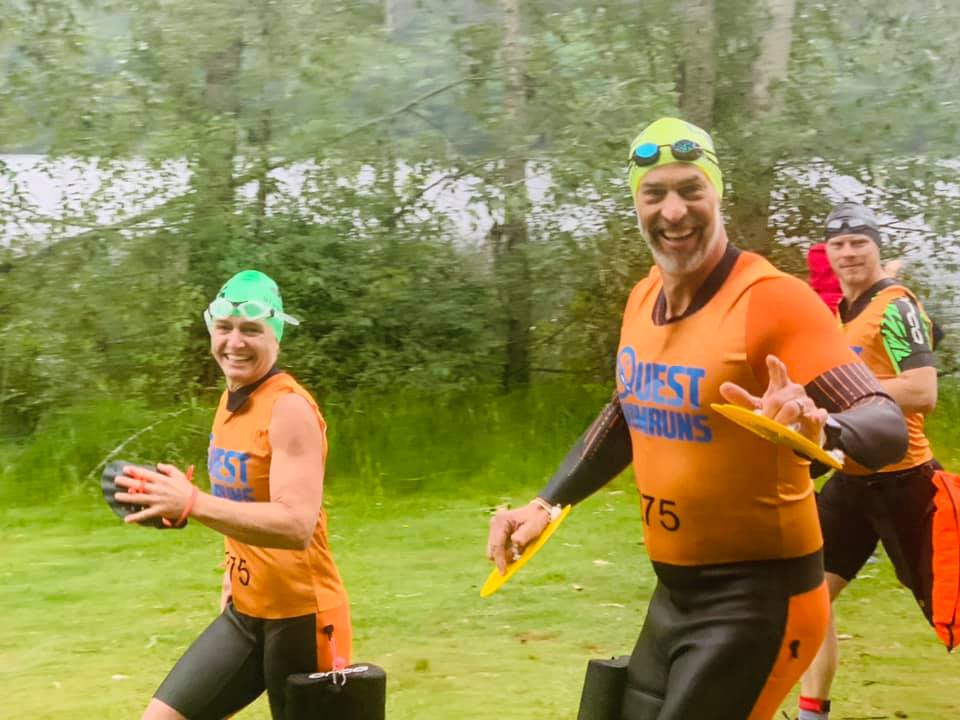 Our Bellingham Summer Adventures At Home and Afar!